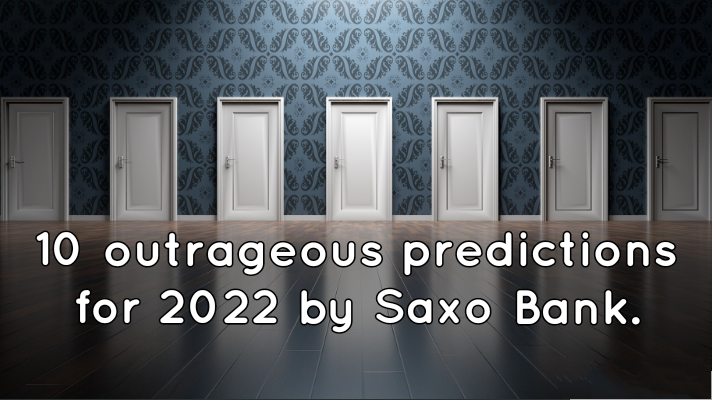 1) The plan to end fossil fuels gets a rain check

Almost all countries make efforts to shift from fossil fuels to renewable energy. Most of countries follow the single goal is to diversify and reduce risks related to price fluctuations for fossil fuel. Saxo Bank predicted for 2022 a slowdown in shift from fossil fuels to renewable energy. All countries suffered huge economic losses because of COVID-19 and global lockdown. So, shift to green energy will be delayed and policymakers will relax limitations for oil and gas production. This will increase competition on market and will encourage producers to ensure adequate supply & demand. Prices for fossil fuels grown sharply because demand returned. OPEC is manipulating oil prices to make resource rise in price.

The net zero emission challenge (goal) require that the consumption of oil and natural gas decline 29% and 10% respectively by 2030. This is an ambitious plan that might not be realised because of developing countries rely on fossil fuels for growth.

On April 20, 2020, May WTI crude contract dropped 306% and settled at negative $37.63 a barrel on NYME (New York Merchant Exchange). This symbolises the need to control supply and demand for fossil fuels.

The following places meet 90% or more of their average yearly electricity demand with renewable energy (full list available in Wikipedia):

Shift to renewable energy sources will be but much later than expected.

Back in 2012, 94% of teenagers had a Facebook account. In 2021 this number stands on 27% for teenagers. Users started to value their privacy (especially after the Cambridge Analytica scandal) and want to know which data collected and how it used.

Meta is the profitable business but Facebook and Instagram loosing popularity. Only WhatsApp gaining more users but there’s the struggle to monetize it.

After the chaotic 2020 USA Presidential Election, expected also chaotic mid-term election. Supporters of 45th US President stormed the Capitol Hill in tder to prevent the election results from being made official on January 6, 2021.

After Donald Trump was silenced on all major social media, The Trump Media & Technology Group announced about the launch of Truth Social (also stylized TRUTH Social). Former president’s new social media entered into agreement to raise $1bn from investors ahead of planned stock market listing. The TRUTH Social will be censorship free (at least in theory). This may destabilize the mid-term election.

4) US inflation reaches above 15% on wage-price spiral

US labor market has changed during the COVID-19 pandemic. This period will be described in history as a great awakening of workers. Workers demand higher salaries, better working conditions, more work – life balance, unions, etc. The first time since the World War II, US inflation may reach 15%.

5) EU Superfund for climate, energy and defence announced, to be funded by private pensions

EU superfund will address three main problems: defence, climate and transition to clean energy. In EU tax burden is high and one of the best way to finance superfund will be via investment of pension (bonds). EU for last 10 years struggled to maintain adequate inflation rate and superfund will boost all members economy.

In 2021 Reddit’s subreddit made headlines when average retail investors got together and crashed a few big venture funds. That’s the power of unity. The Saxo Bank predicted the similar scenario but for women in investment. Women require more money because she spend it on kids and have longer life expectancy. Because women have less disposable income, they invest less. But even when they invest, they choose less risky strategies that result in lower returns.

According to World Economic Forum, it will take 135 years to close the gender pay gap (before 5ge COVID-19 it was 99 years). In 2022 women will get together in social media and start to demand equal salary and no gender based discrimination.

Women’s Reddit Army will act in coordinated manner to reduce patriarchy in business. And will fund that companies that suit the best to women needs.

The Gulf region countries created agenda with strict timeline to their future beyond oil and gas. For India it accelerate development via huge new investments in infrastructure.

Saxo Bank predicted that in 2022 hypersonics and space are the heart of a new phase of the deepening rivalry between China and US. In the summer of 2021, China tested a hypersonic technology that shoked US authorities.

For 2022 Saxo Bank predicted a medical breakthrough that will extend average life expectancy by 25 years. Scientists may discover how to significantly slowdown the aging process. Scientists prolonged average mice lifespan by 30%. Same will he possible with humans. Longer life expectancy also means elimination of most of human diseases.

Longer average life expectancy will be a massive leap in human quality of life but will bring enormous ethical and financial consequences.

Before I read all 10 articles on Saxo Bank website I was sceptical. But in each prediction is so much logic.

Everyday do more of what makes you happy