Waking up early have nothing in common with productivity

Mar 27, 2021 money, productivity, stress, success, Waking up early have nothing in common with productivity, why you should not wake up early, WordPress, work 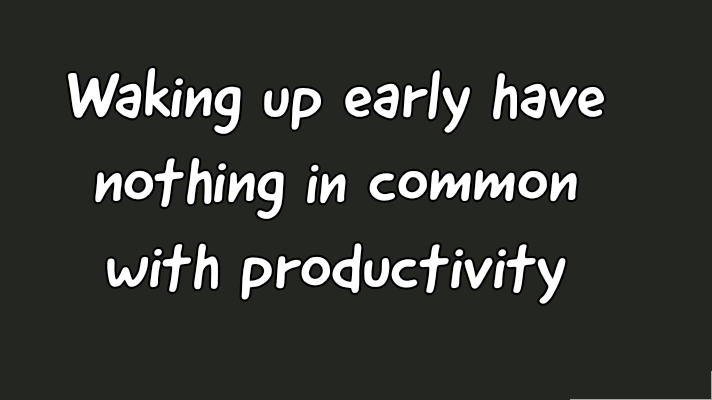 Waking up early have nothing in common with productivity. Sounds odd? This is because we believe articles “Tim Cook wakes up at 3:45AM and you should too”. Basically it’s one size fits all .

I made this list to show that some successful CEO’s wakes up really early. Most of them experience chronic sleeping disorders, sleep deprivation, depression, caffeine abuse.

It’s recommended by doctors to have 8 hours of uninterrupted sleep. Obviously not everyone will agree that he/she needs to sleep 8 hours. Hyper productive toxic culture praise everyone who sleep less, wakes up and drink coffee, workout on empty stomach, mediate, journal and start working before anyone else work.

Working when the world sleeps. Or not?

Hyper productivity praised too much. It reached level when people think that they must wake up at 5AM to be productive. According to this logic person must be sleeping by 9PM. How many people who have family, friends and social life sleep at 9PM? I don’t know anyone like this.

Remember, sleep deprivation leaves your brain exhausted, so it can’t perform its duties as well.

Thank you for subscribing, if you haven’t subscribe now.

You absolutely must fix your thoughts