How much CEO of S&P 500 company earn compared to average employee? 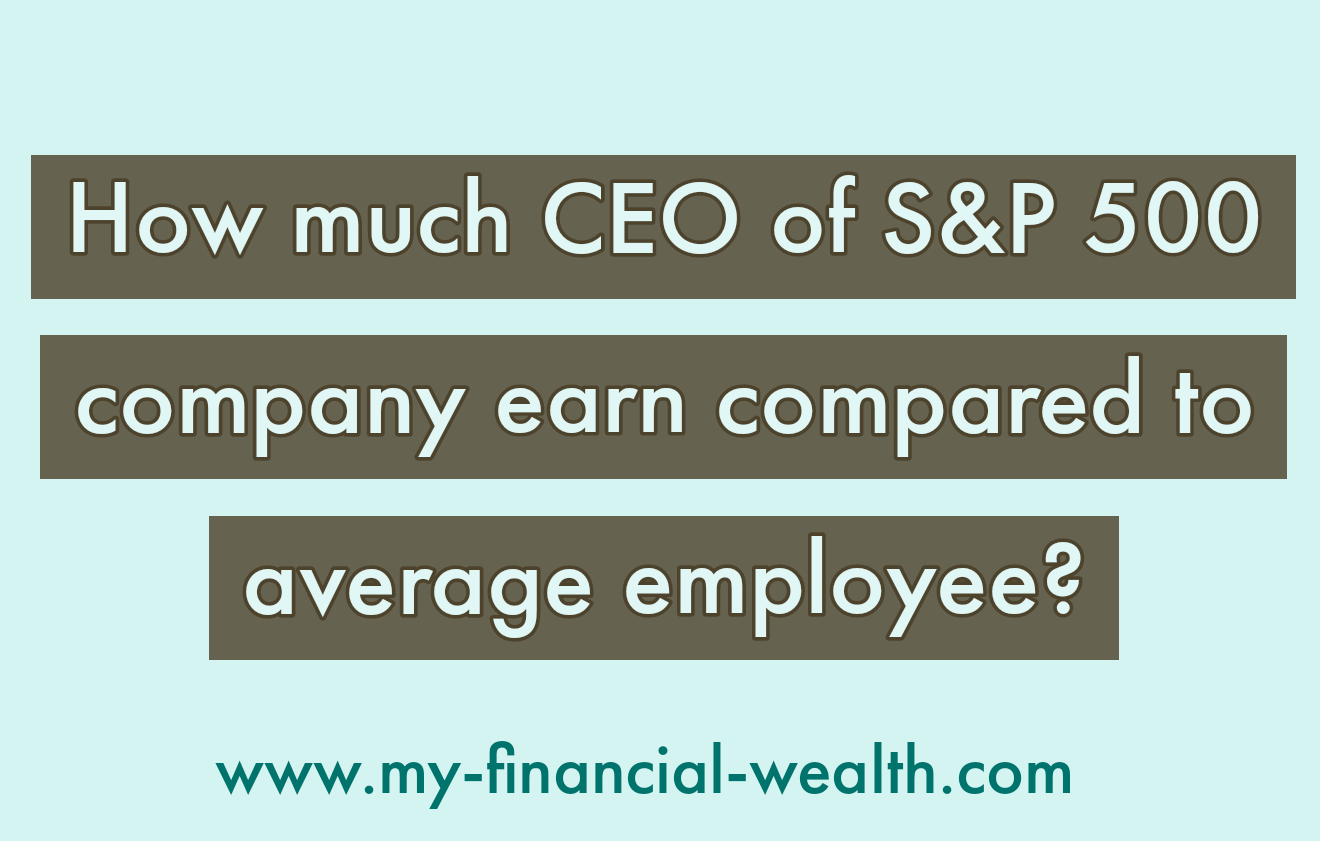 It’s not surprising that CEO’s get paid more than average worker. But let’s take a looks into details.

In 1950s on average CEO receive 20 times bigger salary than average rank-and-file employee. A lot of things have changed since 1950s, especially CEOs salaries and other compensations. In 2000 CEO to average employee salary ratio increased to 120-to-1.

Now situation remains the same: CEO makes too much of money, average worker earn too little. Many will argue that CEO responsible for everything in company that’s why he/she paid more. But payment gap so huge that makes everyone wander “why my time is so cheap?”.

For example in 2018 McDonald CEO Steve Easterbrook earned $15.9 million (base salary $1.35 million per year, stock and option award, incentive plan compensation). After board of directors fired him (consensual relationship with an employee), he will be still eligible for severance plan package. New McDonald’s CEO salary is $1.25 million with target annual bonus (170% from annual base salary). In 2019 was 261 working days. Simple math tells that he makes $5172 per day (base salary) and $60919 per day if to count all compensations.

Another shocking example is Adam Neumann salary and leave compensation in WeWork. Former CEO of WeWork received $1.7 billion from Softbank in order to step down as a CEO of the company. Also he received $185 million as a consultation fees. In same time new WeWork CEO ordered to lay off 2000 employees because company couldn’t afford to pay their salaries. So far Softbank had poured$13 billion into company that now worth only $8 billion. Such a useless compensation to former CEO became possible because he used to hold super-voting stock (his stock 20 times more valuable than shares issued to anybody else). Later super-voting stock radio lowered to 10-1 and after to 3-1.

There’s available entire list of overpaid S&P CEOs. According to ISS (Institutional Shareholder Services) average S&P CEO payment increased to $14.5 in 2018. CEOs don’t get paid the way average employee does. CEO compensation include basic salary, stock options, performance bonus, long-term incentive payout, etc.In some companies it will take 1000 years for average employee to earn as much as CEO earn in one year only. Here’s top 10 companies from S&P list that reported the biggest pay gaps:

Let me explain the numbers. Company on position №1 (Mattel, Inc.) pay to it’s CEO (salary and other compensations) 4987 times more than to it’s average employee. That’s unbelievable pay gap. S&P CEOs total paycheck is disclosed in Form 10K. As more people have access to the Internet as more negative approach people get when they see how much money head of company makes. Let’s also not forget paycheck of managing director, board of directors, COO, CFO, CMO, etc.

In 1980s Reagen tax cut happened and created rule 10b-18 (stock buyback). According to some research this changes stimulated increase in CEOs paychecks. Government expected that companies will invest more money in business growth and technology innovation. It did not happen as predicted. Companies used money to buy back own shares to manipulate stock prices. Recently tax cut happened again but it did not lead to bigger investment in companies by themselves. Also tax cut not influence employees paycheck.

One thought on “How much CEO of S&P 500 company earn compared to average employee?”